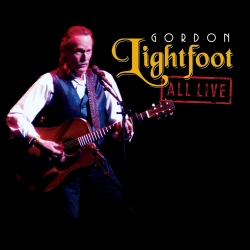 Buy All Live CD from Val

Buy CD from Amazon.com (US)

Buy MP3 album from Amazon.com (US)
Click on "More options," under "Listen Now," to Buy

Gordon Lightfoot on Hockey Night in Canada
The background music is mostly from the All Live CD!

June 29, 2013 - An audiophile, 180 gram 2 LP version of the "All Live" album was released on July 30, 2013. You can order it from Amazon.com (audiophile 2 LP set). For those of us who have a turntable, this is wonderful news. Many of us who grew up on vinyl records are convinced that they sound better than their CD counterparts, especially when they are manufactured to modern audiophile standards. This is a 180 gram Limited Edition. I look forward to hearing it!

April 24, 2012 - This is a lovely new album, and we are very lucky to have it now. With only one live (audio) album, from back in 1969, this new CD is long overdue. We do have the video from the same timeframe (recorded in 2000, while the CD tracks come from concerts in 1998, 1999 and 2001), but there was no CD of the Reno concert and most of us didn't make our own from the DVD (which wouldn't be the exact same result as a recording mastered for CD, in any case).

The 19 tracks include all four top 10 hits, If You Could Read My Mind, Sundown, Carefree Highway, and Wreck of the Edmund Fitzgerald, plus Rainy Day People which reached #26, so casual fans will hear all the songs they remember from the radio. And it contains most of the songs he sings every night in concert - to this day - with the strange exception of Don Quixote. And, much to my disappointment, he didn't take this opportunity to give us a live recording of Sit Down Young Stranger, a song that is a special favorite of many of us, even if the public at large doesn't know it. But we do get three of the big songs that weren't hits: the epic Canadian Railroad Trilogy (the fourth official recording), Early Mornin' Rain and Song For A Winter's Night, all from his United Artist days. The absense of Don Quixote aside (when pressed for his favorite song recently, Lightfoot said it was this one!), it much resembles a single set "casino" program, much as you might hear today. As one fan said to me, it so much reminds her of the concert she went to recently, and brings back all those good feelings.

I would be remiss not to mention the fact that this album is truly "all live", a point which Lightfoot himself makes clearly in the album notes and in interviews. The original live concert mix was used; not even a tasteful remix from longtime recording engineer Bob Doidge. Lightfoot decided that the original mix sounded better than any remix. This just doesn't happen! And so we really have a live concert to listen to at home, one that transports us to the venue.

The arrangements demonstrate the very best the longtime band played, with the stirring bass lines by Rick Haynes, the tasteful percussion by Barry Keane, the creative keyboards by Mike Heffernan, and the inventive and often very complicated lead guitar riffs by the late Terry Clements. It is that band, and those arrangements, that Lightfoot wanted to showcase now.

Lightfoot had originally planned to withhold this album until after his death, which always made me sad because many of his older fans might pre-decease him. He seems to have so much stamina, and might outlive many of us! But recent events including the death of longtime lead guitar player Terry Clements, lead him to release the album now. And we are thankful.

There is one special surprise in this recording: it's a rare example of my favorite version of the Early Mornin' Rain lyrics, what I call the "pavement" version. Originally written and recorded as "where the cold wind blows", he changed the line in the 70s to "with a pain that ever grows" (e.g. on Gord's Gold). But occasionally, mostly in the late 60s and never on an official recording, he sang it as "where the pavement never grows" - and it is that version which he used on the recording he put on this album! I think it was originated by Ian Tyson (who sings it this way), and I always thought it was the most playful version, so I am very happy to have it on an official release.

I think you will treasure this album, as one of the few live recordings we have, and play it often. I know I will.

I received a copy of the CD from the record label.